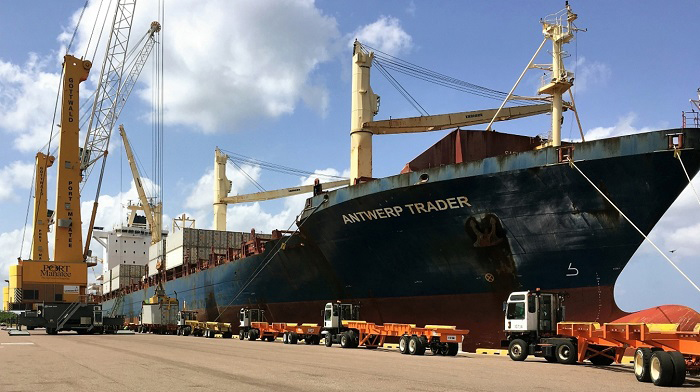 At Port Manatee, containerized cargo is offloaded from a Del Monte Fresh Produce vessel, adding to the record container volume the port is experiencing in its current fiscal year.

Port Manatee’s container volume for the first 10 months of its current fiscal year has already reached a full-year record.
During the 10-month period from Oct. 1, 2016, through July 31, 2017, Port Manatee saw moves of 32,907 twenty-foot-equivalent container units – significantly more than the Florida Gulf port’s full-year high mark of 30,431 TEUs established in the fiscal year ended Sept. 30, 2010.
The total container volume of 32,901 TEUs for the first 10 months of fiscal 2017 is up 47 percent compared with the first 10 months of the preceding fiscal year. During all of fiscal 2016, Port Manatee realized moves of 26,210 TEUs.
Port officials attribute the big increase to the ongoing transition to containers from breakbulk shipping by longtime tenant Del Monte Fresh Produce N.A. Inc. for its imports of Central American pineapples and bananas, as well as the continuing success of World Direct Shipping’s weekly service that has brought refrigerated produce from Mexico since November 2014.
“We are excited to have already set a new container record for Port Manatee and are further encouraged that this favorable trend is anticipated to be sustained for a long time,” said Carlos Buqueras, Port Manatee’s executive director, who pointed out that the port within the past year has extended its agreements with both Del Monte and World Direct Shipping. “The numbers support that Port Manatee is indeed the fastest-growing containerport on Tampa Bay.”
Port Manatee’s overall tonnage, including bulk and general cargos in addition to containers, also is up substantially. For the 10-month period from Oct. 1, 2016, through July 31, 2017, Port Manatee had a total throughput of 6,438,146 tons, up 17 percent from the comparable period a year earlier and putting the port well on pace to eclipse the fiscal 2016 total of 6,888,757 tons.
“The dynamic rise in Port Manatee’s cargo activity is striking in and of itself and is further impressive because it translates into growing numbers of family-wage jobs and other positive economic impacts for our community,” said Vanessa Baugh, chairwoman of the Manatee County Port Authority.
Located “Where Tampa Bay Meets the Gulf of Mexico,” Port Manatee is the closest U.S. deepwater seaport to the expanded Panama Canal, with 10 40-foot-draft berths serving container, bulk, breakbulk, heavylift, project and general cargo customers. The port generates more than $2.3 billion in annual economic impact for the local community, while supporting more than 24,000 jobs, without levying ad-valorem taxes. www.portmanatee.com