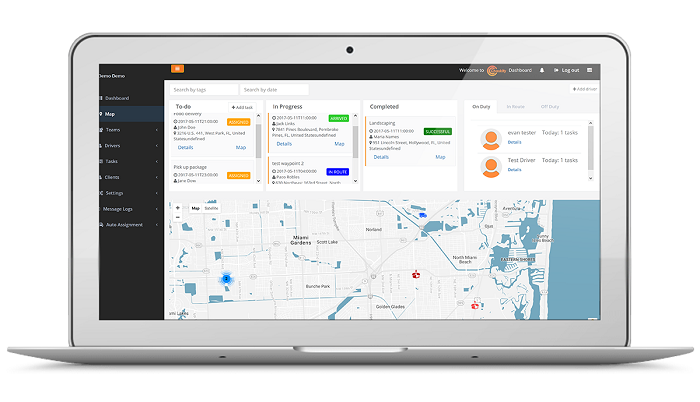 “Consumers have become accustomed to on-demand delivery. They want it now, and companies are rushing to figure how to deliver their products not just within three to five business days, but within hours,” says Dr. Dmitry Byk, co-founder of Chaskify. “We’re poised to make that happen, giving even the small mom-and-pop pizza restaurant the ability to compete with much bigger companies.”

Just a year ago, Chaskify, named after the fast, agile and physically fit messengers of the Inca Empire, muscled its way into the last-mile, on-demand delivery market with free service packages. Today, the Hollywood-based company boasts more than 60 customers nationwide and technology that gives small- and medium-sized businesses the tools to ship and deliver on a scale that will level the playing field with bigger competitors.

Dashboard
Chaskify’s app includes a web-based dashboard, intelligent dispatching, navigation, driver tracking, analytics and more. The application is used by a wide range of businesses that manage pickups and deliveries such as a mobile workforce, repair, healthcare, packaging, beauty and home services. Chaskify also offers route optimization among the many modifications that are available at no charge, in contrast with its competitors.

Aim Dental Lab in Brooklyn turned to Chaskify to streamline its daily deliveries in the New York City area.

“[Chaskify] brought us into the 21st century,” says Gabrielle Blackman, customer service and shipping supervisor at Aim Dental Lab. “We used to have one person stay late to write down the next day’s deliveries and pickups by hand. Now, it’s all automated and we can schedule last-minute tasks and route it to the closest messenger. Our customers love it because they can track their packages. It’s like watching your Uber driver.”

Chaskify makes it easy for Blackman to manage and analyze Aim Dental Lab’s delivery operations with real-time updates. She’s mounted a large screen in her customer service center, where operators can watch drivers making deliveries to area doctors and laboratories. Drivers use smartphones equipped with the Chaskify app, which maps out their routes like Uber does for its employees behind the wheel.

New Platform Release
The Chaskify app has powered thousands of deliveries and soon will give small companies the tools to take direct orders from customers. Details of the direct-order system remain under wraps, but Byk says it will boost the company’s profile among competitors, both nationally and globally.

Byk points to the company’s ability to modify and update the Chaskify app within days as a key reason why the company has grown quickly in such a short time.

“Our competitors take weeks to reply to their customers. We respond and adjust to meet their needs, often within hours. Our ability to customize and react quickly is what we’re known for,” Byk says. “And when our turnaround is quick, their deliveries make it from door to door even faster.”